Planets in the 4th House

Mars or Jupiter in the 4th House

Mars in the 4th House 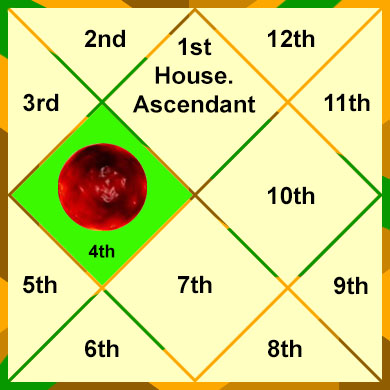 Indications for Mars occupying a native’s 4th House, are similar to those given by an afflicted Moon.

The person’s relationship with their mother will be strained.  Moreover, there will be frequent arguing, and they are unlikely to be good friends.

Unless Mars is well aspected or placed in his own House, the person is unlikely to own property or live in attractive surroundings.

Motor vehicle problems will be present.

If Mars is afflicted, there could be fires or violent events in the home.

The native will be prone to heart disease.

They will tend to be cruel, mean, and miserly, and will look for contentment in the misfortunes of others.

There will not be any inheritance or ancestral property from the maternal side, or if there is, the native is likely to lose it.

All kinds of endings will be troublesome or discordant, and the last phase of life will be difficult.

However the person’s career will be successful or powerful, but there may be an interrupted education or difficulty during tertiary study.

Mars in the 4th House indicates a harsh aspect to the person’s marriage due to the aspect cast by Mars on the 7th House, the House of marriage.  The remedy for this is for the native to marry a spouse who also has a Mars affliction of their 7th House.  The exception to this rule is when Mars is in Scorpio in the 4th House, where it is exalted and has a beneficial influence.

If Mars is in Aries, Scorpio, or Capricorn and in the 4th House, the person is likely to own as much real estate as they desire.

The same applies to vehicles.

The mother is likely to be powerful and long-lived, although their relationship will be intense and uncomfortable.

An excellent education is indicated, and the person’s fixed assets will be numerous.

Mars in Cancer in the 4th House, indicates that the native’s mother will not have a happy life, or may face extreme difficulties with her health.  The native’s relationship with her is strained, and characterized by constant arguments.

There will be little ownership of land homes or other real estate.

The dwelling will be run down, and the native will experience car problems, or will not own any car at all.

There will be few fixed assets in this native’s portfolio.

The career will not be outstanding, and heart disease is likely along with unhappiness and dissatisfaction.

There will be no inheritance or ancestral property on the mother’s side.

Education will be interrupted and not to a very high level.

Jupiter in the 4th House

This is a very fortunate placement for the native, as Jupiter here brings great good luck.

The person will experience happiness, contentment, and will enjoy many of life’s comforts and luxuries.

The person will be well cared for by the mother, who will be wise, and nurturing.  Their relationship will be close.

Ownership of a large home, numerous fixed assets and several vehicles is indicated.

It is likely that the native will inherit ancestral wealth, real estate and other benefits from the mother.

A successful career is likely which leads to respect from peers, colleagues and the community at large.

A tertiary education will be easy to obtain for this person.

They will be highly spiritual and interested in higher states of consciousness and enlightenment.  They will be passionate about philosophy, religion, and all health subjects.

The native will be well brought up, generous and kind.

However, if Jupiter is afflicted by a negative aspect from some malefic planet, the native could lose control of their fixed assets and experienced disharmony with their mother.

If the 4th House is Cancer, Sagittarius, or Pisces, and contains Jupiter, the person is extremely lucky and will achieve superlative benefits in the fields highlighted above.

There will be a substantial ownership of real estate and other fixed assets leading to remarkable wealth.

The person will have a happy life and be very interested in spirituality or religion.

There will be ample inheritance of wealth, probably in the form of property.

The person’s mother is likely to be famous or special in some way, and their relationship will be rich with depth and joy.

The career will be a source of deep satisfaction.

Is the person’s life draws to a close, they will experience further contentment, secure in the knowledge that the consciousness will continue, albeit in a different form.  Endings will be pleasant and easy.

If Jupiter is in Capricorn in the 4th House, the person’s life will be plagued by dissatisfaction and unhappiness, including some suffering due to their relationship with their mother, whose own life is likely to be difficult and challenged.

Education is harmed, and a tertiary degree may be difficult to obtain.

There are likely to be problems with a vehicle and the person’s dwelling or home will tend to be dilapidated.  There will be few fixed assets.

The person’s attitude to religion is likely to be distorted by a rigid or dogmatic upbringing, even leading to a brainwashed fundamentalism if Jupiter is further afflicted by a negative aspect from another planet.

An ancestral or maternal inheritance is unlikely, or if it is obtained the person’s ownership of it will be temporary.

Saturn, Rahu or Ketu in the 4th House