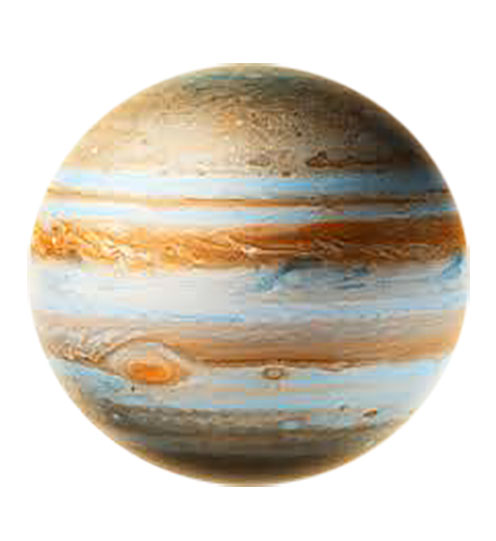 Jupiter is the planet that most strongly influences our luck and fortune. It exudes an expansive, optimistic energy that benefits whichever planets or houses it associates with.

It also tells much about a person’s deserved benefits earned from activities of previous lives.

This is because Hindu life is based on the theory of karma and reincarnation.

This means that what appears in one’s life as luck or chance advantages are considered the results of past efforts.  So the condition of Jupiter (as well as the 5th house) may be analyzed to derive information about one’s past life credit.

Another key characteristic of Jupiter is its influence on philosophy, spiritual affairs, and religion.

Its effect is more pronounced in the realms of traditional beliefs, faith, and devotion rather than ascetic, occult or mystical tendencies.

It should be mentioned however that in this system (which excludes the planets Uranus, Neptune, and Pluto), Jupiter and Saturn are deemed as the outer planets, which are capable of granting the greater evolutionary characteristics of man. In this regard, it is worth noting that when Jupiter and Saturn develop any mutual aspect (whether conjunction or opposition) a splendid spiritual nature can be expected.

Western and Vedic Astrology are in unison with regards to acknowledging this immense advantage, although Vedic Astrology also attributes Jupiter as the main planetary marker for one’s children.

Thus, if Jupiter is elevated or very formidable, the person is expected to have very good relations with his children, and their lives will be mostly prosperous. However, if the planet is distressed, a contrasting scenario may happen, and there may be very few children or none at all.

Nevertheless, the 5th house must also be factored into consideration.

Jupiter is characterized as masculine, satvic (pure), and benefic.

It is exalted in Cancer (which allows it to perform its best) and distressed in Capricorn (which brings out its worst qualities).

Jupiter governs Sagittarius and Pisces and bequeaths some wonderful benefits to both of those signs. It receives directional strength (dik bala) from the 1st house placement, which is also considered as its best placement. Jupiter’s known allies are the Sun, Moon, and Mars.

On the other hand, Mercury and Venus are considered as its adversaries, while Saturn is deemed as neutral.

If necessary, one may resort to wearing yellow sapphire or yellow topaz to counter the negative effects during times when Jupiter is in an afflicted state.