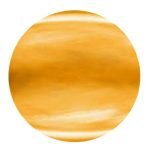 Venus is widely known as the planet of love. Being a benefic, it improves the house it inhabits, as well as any planet that is associated with it or aspecting it. Similar to Jupiter, it bestows wealth, luxuries, and good fortune on an individual when it is robust and positioned well. Aside from the fact that it rules such critical matters as married life and love affairs, it also governs happiness in particular. Suffice to say, there is practically no other astrological circumstance that can ruin life’s sweetness quite like a Venus in distress. Moreover, it is recognized as a planet of beauty, sensuality, and desire, thus a person with a well-positioned Venus tends to be beautiful, captivating, sympathetic, and desirable to the opposite sex. Such an individual would also likely be creative or an admirer of beautiful things, since Venus is also known as the planet of aesthetic admiration.

On the other hand, since Venus also governs the reproductive system, and when it is poorly-positioned or influenced by malefics it often triggers sexual ailments, venereal diseases, or reproductive illnesses. It must also be mentioned that when Venus is in Virgo (its fallen sign), it often leads to an excess participation in sex or sensual gratifications.

Western and Vedic Astrology (Jyotish) have very similar significations concerning Venus, except that in Vedic Astrology, Venus is used to define the magnitude of one’s luxuries, comforts, and happiness. The single greatest value of this planet however, rests in its dominion over love affairs, marriage, and the spouse. It’s also worth noting that when Venus is in an angular house such as the 1st, 4th, 7th, or 10th, it leads to a person who is extraordinarily compassionate and lenient.

Venus is known as feminine and watery, and is best positioned in the 4th house, where it gets its directional strength (dik bala). Its exalted sign is in Pisces, where it functions best, while its poorest is in Virgo (its fallen sign). It rules Taurus and Libra, and usually generates extremely good effects in those signs. A distressed Venus may be appeased or strengthened with a diamond. In terms of metal, Silver would easily perk up a weakened Venus. Its noted allies are Mercury and Saturn. Its adversaries are the Sun and Moon, where it is absolutely not welcome in their signs. Jupiter and Mars are considered as neutral.