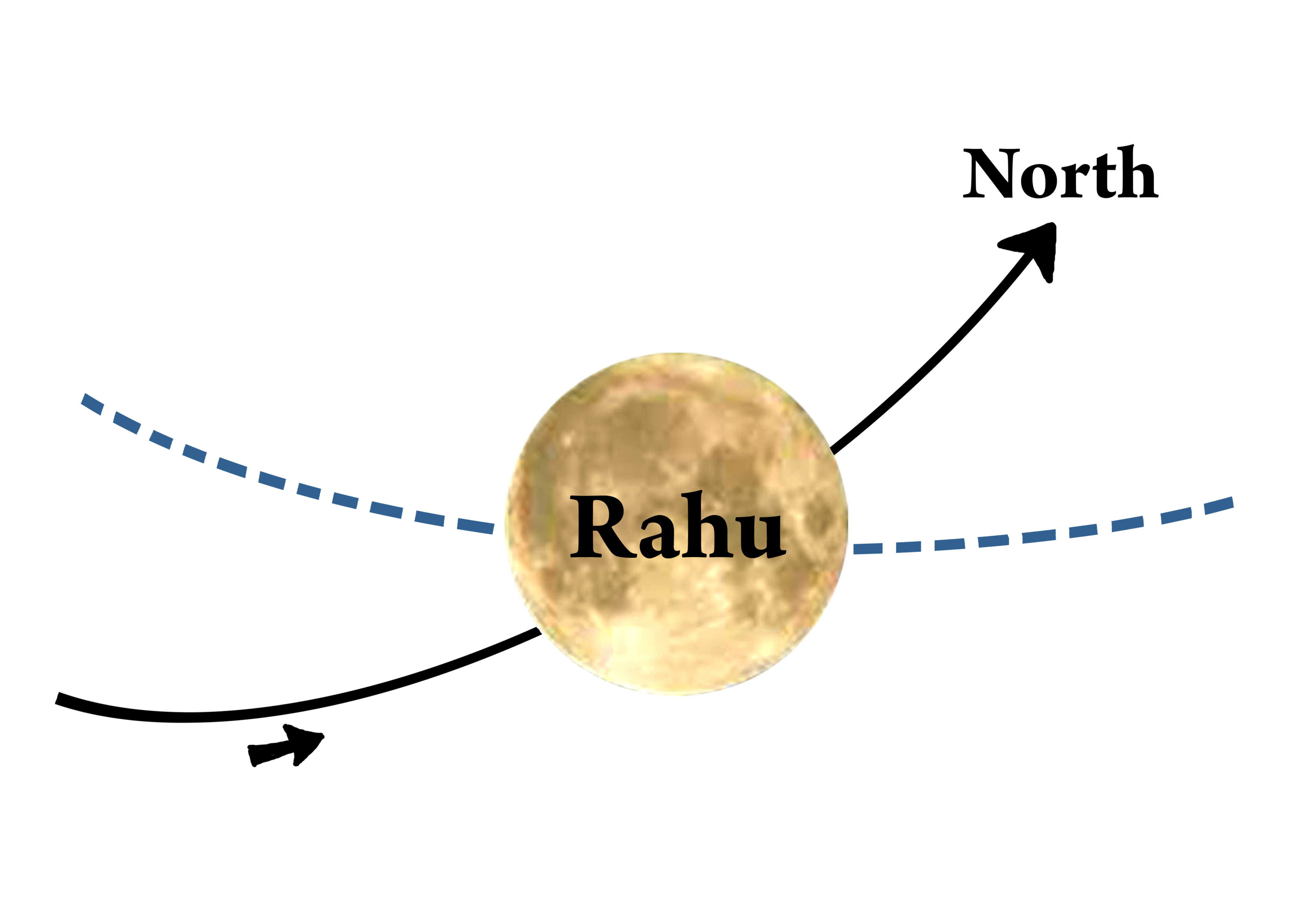 Rahu & Ketu – The North and South Nodes of the Moon

Two malefic powers which are actually not planets but assumed positions in the sky are the phenomena known as Rahu and Ketu.

Ancient Vedic Astrology gurus have dubbed them as “shadowy planets” due to their perceptible influences in the horoscope despite the fact that they have no physical manifestation.

We have to refer to a Vedic Astrology myth about their creation in order to best comprehend the influence of Rahu and Ketu.

According to the story, Lord Vishnu was giving out amrita (a concoction which grants immortality) to the Devas (Gods) and planetary beings.

After the potion was fully consummated, the Moon and the Sun found out that a demon (rakshasa) actually managed to infiltrate the gathering and was able to partake of the immortality nectar.

The serpentine demon was uncovered by the luminaries and Lord Vishnu swiftly wielded his sword, severing the demon into two.

But already having gained immortality from drinking the potion, the abominable being did not die but became two separate creatures instead.

The upper part of the rakshasa became known as Rahu while the bottom half became Ketu.

And from that time on the said creatures became bitter enemies to everyone that was present in that gathering.

It is believed that this is the cause for why these enemies repeatedly try to swallow up the Moon and the Sun (which happens during every eclipse, when either of them are in conjunction with Rahu or Ketu).

Luckily, both luminaries always manage to get away however, being also immortal as they are.

To really appreciate the impact of these nodes, one should always remember the origin story, because Rahu and Ketu in fact actually operate as if they were two parts of the same body. Imagine a being with nothing but animalistic or instinctual urges and with no meaningful intelligence, whose only purpose is to satiate itself with all the pleasurable stimulations that it can possibly muster.

This is an extremely concise description for Rahu, whose main characteristic is unquenchable worldly cravings.

It is an absolutely hedonistic, oblivious, and hard-hearted creature. And if such a description can be applied for Rahu, how much worse can Ketu be (the part of the serpent without a brain)?

With complete ease, Ketu can create some of the most powerful, uncontrollable, and insensible actions.

Even more than the other planets however, the varieties of consequences that Rahu and Ketu may instigate is entirely reliant upon other astrological details in one’s chart.

Because even if Rahu and Ketu are treated as planets in Vedic Astrology and are ascribed fairly probable outcomes, they tend to act rather differently when compared to other heavenly bodies.

Due to the fact that they are elemental and instinctive influences, they can be more likened to bodies of energy rather than targeted forces.

They are also not capable of casting aspects, unlike other planets, although this point is a matter of contention for Vedic Astrologers.

And even though Rahu and Ketu are definitely malefics, oftentimes it is very difficult to determine with some kind of certainty the exact damage they can inflict in a horoscope.

A person usually fares better if the nodes are found in houses which can absorb malefic entities (such as the 3rd, 6th, 10th, & 11th), and that more destruction is generated if Rahu or Ketu inhabits the houses of their adversaries, or if other malefics are also aspecting them.

With regards to the nodes’ connotations, ancient writings ascribe almost the same level of significance for both. They are both held accountable for all types of evils, like untreatable illnesses, murder, robbery, poison, snakes, anxieties, undetectable diseases, incarceration, and so on and so forth!

But we can draw a thin line of distinction between the two, when it comes to their positive qualities.

For example, it is assumed that if Rahu attains its desired worldly pleasures, that it would also be capable of providing power, renown, political accomplishments, wealth, and beauty when it is positively positioned.

However, because Rahu’s desires are unquenchable, it’s likely that a person still feels empty, even after attaining these benefits. It is also worth mentioning that the scriptures actually state that anything which may have been provided during the 18-year Rahu dasa (period) would be normally taken away in the final remaining years before the conclusion of that period.

With regards to Ketu’s positive characteristics, it is called moksha karaka, or the guide of illumination. It provides excellent spiritual inclinations, particularly attributes such as austerity and non-attachment.

Hence, it is quite normal to find a conspicuously-placed Ketu in the horoscope of a devout spiritual searcher.

Gnana denotes wisdom, learning, or discernment, which in India is regarded as a certain pathway towards illumination. Thus, combined with the spiritual inclinations generated, this entity bestows excellent powers of discernment, sometimes even psychic capability.

Although some scholars maintain that Rahu’s powers are identical to Saturn’s, while Ketu’s are similar to Mars, this is only accurate from a general perspective.

Because Ketu, when unfavorably positioned, can destroy one’s enjoyment in an unpredictable, random manner. Rahu, on the other hand, disturbs us by being sluggish, foul and insensitive, in a subtle and deliberate kind of way.

The most harmful consequences of the nodes happen when either one is tightly conjunct with another planet. In such a scenario, the conjoined planet becomes badly damaged, along with the houses it governs.

If the node in question is Rahu, it damages by way of numbing or muffling the effects of the close planet to a point where it becomes essentially immobilized to function properly.

Ketu, on the other hand, seemingly melts or gobbles up any planet that comes into conjunction with, into some kind of black hole or bottomless pit.

As a result, instead of merely having its usual powers cut off, that planet is sent into a strange, erratic, and insensible or hysterical actions.

When attempting to define the nodes, it bears repeating that one should remember the utter absence and abandonment of any kind of logic, rationality, or wisdom that personifies Rahu and Ketu.

They are primal, neurotic, and irrational influences and specify certain points in life when a person just has very little control.

Rahu and Ketu are not categorized as either feminine or masculine.

They are both said to be exalted in Virgo, Gemini, the signs ruled by Mercury.

The logic behind this seems to be that Rahu and Ketu, which are absent of any mental faculties, absorb some of the discrimination provided by Mercury’s energy.

It’s also worth noting that Rahu and Ketu usually travel backwards but stop intermittently and move forward for brief stretches.

During these times, it has been observed that the nodes become exceptionally powerful.

It is therefore very important that whenever studying a horoscope, the ephemeris must be checked in order to establish whether these entities were static or moving forward.

If moving forward, then they can be deemed as extremely positive and revitalizing forces capable of bequeathing similar effects to those in their exalted positions.

There are no fallen placements indicated for Rahu and Ketu, but since these nodes are noted adversaries of the Sun and Moon, they may deliver worse than normal consequences in their signs.

Even though Ketu is not actually involved in the friendship system, many astrologers assume Rahu’s adversaries to also be hostile to Ketu.

Additionally, aspects from those planets which are malefic to the nodes will function as afflictions, and will cause them to create even more havoc than usual.

The effects of Rahu can mitigated by the gem Gomed (hessonite), while Ketu requires a Cat’s Eye (chrysoberyl).

INDICATIONS OF BOTH RAHU AND KETU