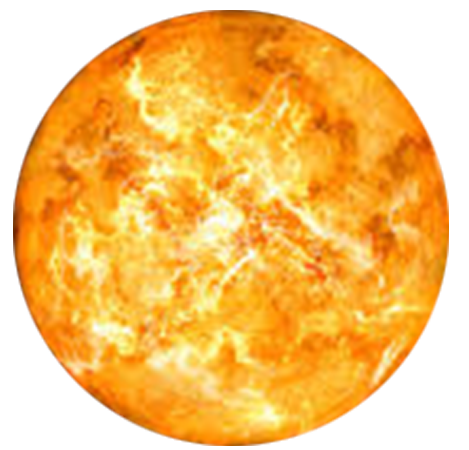 In life, as well as in Vedic Astrology, the Sun is the central character of the Solar System.  Because of this, it reigns over all varieties of central entities, e.g. the Central Government, an organization’s centrally-powerful person, and so on and so forth. In relation to ourselves, the Sun also dominates our core, which is our soul, our Self, our ego.

In traditional Vedic Astrology, even in James Braha’s book, the Sun is seen as a malefic planet.

At IdealHoroscope.com, we take the opposite view, the one put forward by the eminent sage Maharishi Mahesh Yogi.

According to Maharishi, the Sun represents both the self, the individual self of daily life, and the Self, the cosmic, all encompassing, absolute, undying pure consciousness.  It therefore cannot be bad.  If it appears to be so, it is only because the Sun in one’s chart is poorly placed, or badly aspected.

As for the concept of combustion, where the Sun is seen to dissipate the effects of other planets occupying the same house as the Sun, this can be explained by the tendency of the Sun to exude warmth and personality all around, often with the effect of drawing attention to oneself. So for example, a native with both Sun and Venus in the same House, could enjoy a career on the stage, but whereas the glory of Venus as an actor is to enjoy performing the role within herself, the Sun prefers to focus on himself within the role.

The Sun is the provider of light for all other planets and all beings, so, in astrology parlance the Sun controls our center of energy. And as the source of energy for the entire universe, we also evaluate our own levels of energy with respect to the Sun’s own placement in our respective charts.

The Sun stands for the soul, personality and the body of a person, and because of that its positioning is extremely important. The Sun’s optimum position is in Aries (Mesha), where it is exalted. Directly opposite from that position is its poorest placement, in Libra (Tula) – its fallen sign. The Sun reigns over the Leo (Simha) sign and that of the house which it inhabits.

In Western astrology, the Sun is recognized as the most vital component, but such is not the case in Vedic Astrology. Despite the fact that the designated interpretations for the Sun are practically the same in Vedic Astrology, Moon is considered more important because it is believed to be directly responsible for happiness and overall well-being. The Sun is still very significant however, because it controls attributes such as power, authority, confidence, and prominence. It also portrays the father and has a massive influence on a person’s career as well as any worldly endeavors.

The Sun controls the soul and is known as the atmakaraka, or the soul indicator. In this regard, the Sun’s circumstances and environs expose certain inclinations and sympathies which are very basic attributes to the individual.

Any undesirable consequences of the Sun are be easily overcome when other benefics aspect it. Thus, when the Sun is aspected by Jupiter, Venus, or the Moon, it generates very favorable results.

The Sun is considered to be masculine in gender. It is hot, dry, exuberant but benevolent. The allies that welcome the Sun in their houses are Jupiter, Mars, and the Moon. Its known adversaries are Saturn and Venus, while Mercury is deemed neutral. To enhance the effect of the Sun, the gem to wear is a red ruby. Alternately, metals such as copper and gold are also of great assistance to promote the Sun’s effect.

INDICATIONS OF THE SUN