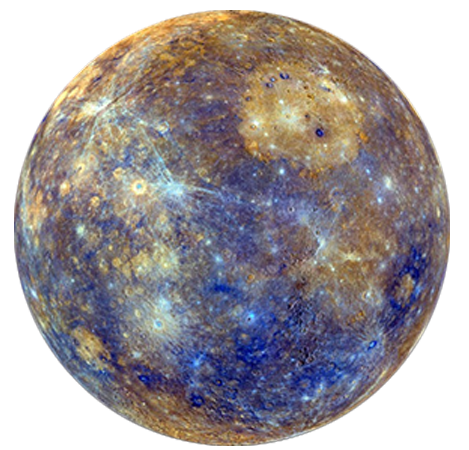 Mercury is regarded as the planet for subjects such as intelligence and communication. On its own, it is an absolutely beneficial presence that invigorates its associations and creates positive effects. However, since it is essentially genderless and neutral, it adopts the characteristics and qualities of whatever planet it is in conjunction with or aspected by. Because of this, it is critical to closely scrutinize its circumstances prior to giving interpretations regarding its influences on a particular house. It would also be a foregone conclusion that if Mercury is in conjunction with a malefic like Mars, it will be influenced negatively by Mars and will therefore also become a malefic, which thereby gives Mars additional advantages and greater powers. In such a case however, the house should be clearly defined as being affected by two malefics.

Mercury controls speech, intelligence, learning, and all intellectual activities. It is accountable for producing educators, writers, and speakers. It also governs business and industry, and is a constant presence throughout business people’s lives. The nervous system and confidence are other issues which are also contingent upon Mercury’s condition. Therefore, when Mercury is poorly positioned or in distress, this may signify a person who is tense, overanxious, self-important, and doubtful.

Another aspect worth discussing is that Mercury may, without intending to, inflict damage in certain houses because of its shallow disposition. It has a reputation in Vedic Astrology as being indecisive, insincere, and often seen as detached and having a very unconnected personality.

Western and Vedic Astrology have mostly similar interpretations for Mercury except that in Vedic Astrology Mercury is deemed to be exalted in the first 15 degrees of Virgo instead of the Aquarius sign. Furthermore, it is also worth noting that Mercury is not the only planet which can affect the intellect, since this capability is also a province of the Moon, which reigns over the common-sense and memory features of the mind

Mercury is genderless, impartial, indifferent, and dry. Its best position is in the 1st house where it gets its directional strength (dik bala). It is exalted in the first half of Virgo and consequently performs its best, while its poorest performance is in Pisces, which is its distressed sign. It controls Virgo and Gemini and therefore generates especially good results in both of those signs. Mercury is a sprightly and very energetic planet and exudes such an aura when it conjoins with a house or planet linked in some manner to the physical body (such as the 1st house or its ruler).

To contradict the effects of a distressed Mercury, one can wear a green emerald gem. Mercury’s allies are Venus and the Sun, in whose signs Mercury is warmly accepted. Its adversary is the Moon, while Saturn, Jupiter, and Mars are considered as neutral bystanders.

INDICATIONS OF THE MERCURY